Our trip to Denmark - part I of II 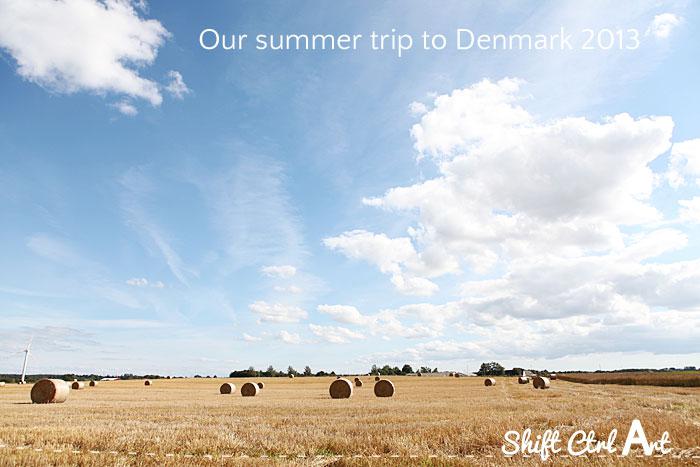 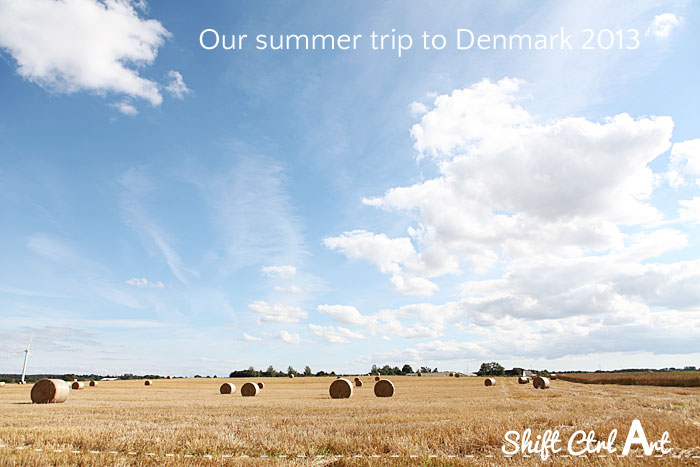 B and I left for our trip to Denmark on August the 20th and arrived the next day on the 21st. We stayed until September 18th, making our trip almost a month long.

When I won second place in the Frogtape contest in July, there was some real money associated with the win, which was burning a hole in my pocket, so we spent it on a couple of tickets to visit our family and friends in Denmark.

We arrived during harvest season and we were so lucky weather wise. I got the above photo one day when driving past this field of hay bales, had my mom pull over and I ran down a small dirt path for 10 minutes to get this shot. I always wanted a great hay bale shot. 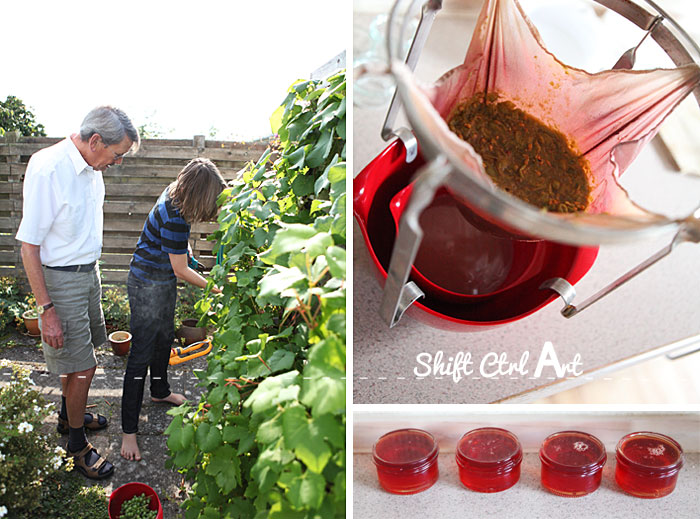 During our stay we stayed with my parents. Here B and Grandpa were picking sour grapes and then made it into grape jelly. They also made apple jelly both of which we later had with some pork roast, potatoes and gravy. 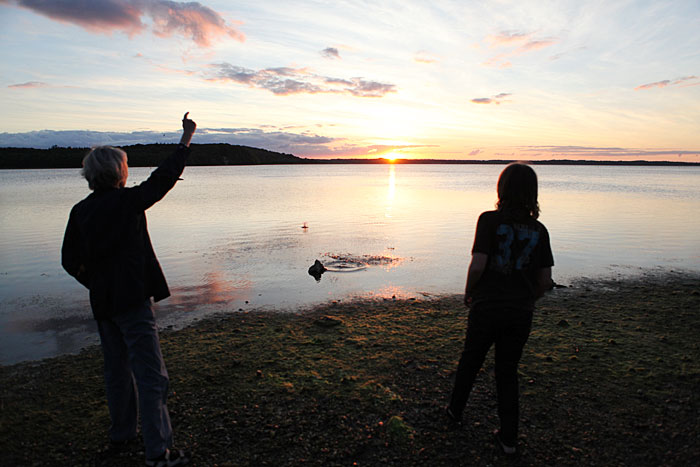 We also had some time to walk down to the water with Grandma and throw in some rocks. My parents live a short walk from a bay. Denmark is a relatively small country consisting almost entirely of islands, so there is lots of water everywhere. 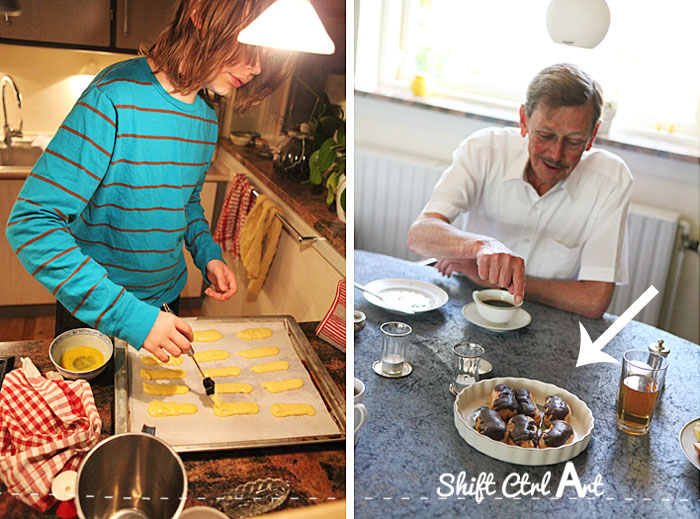 B made his by now famous Chocolate Eclairs for Grandpa (and Grandma). 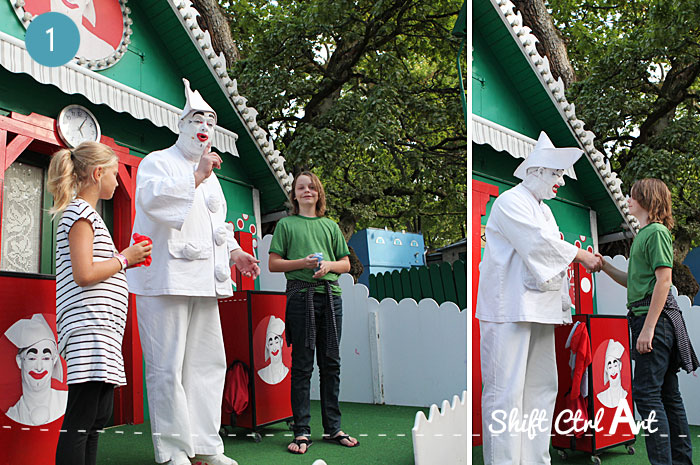 So I casually mentioned in my last post that we went on 16 field trips. I have stuffed today's and tomorrow's post with them and numbered them as well, just so we can all follow along. You want to, right?.

1 - we went to Bakken, "The hill" which is 430 years old - it opened in 1583, no joke. There is a little kid's show where with Pjerrot - the lovely man in white. We love that show. B got picked for the stage which was awesome. We went with Grandma and had such a great time. 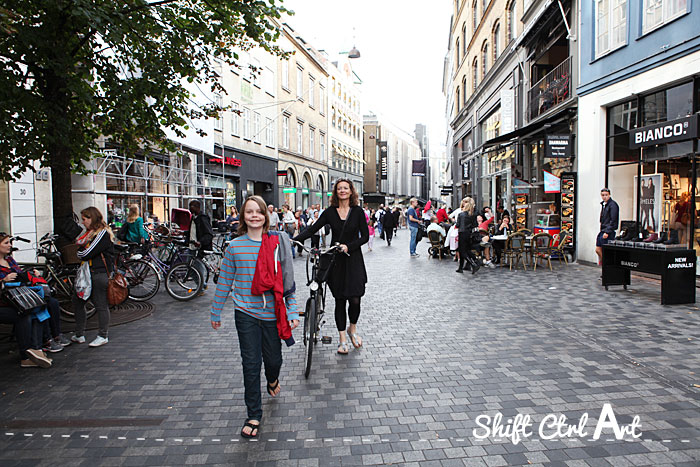 I have a really cool cousin who lives smack dab in the middle of Copenhagen, who we stayed with for a couple of days. We had such a great time and took full advantage of being close to a lot of attractions. 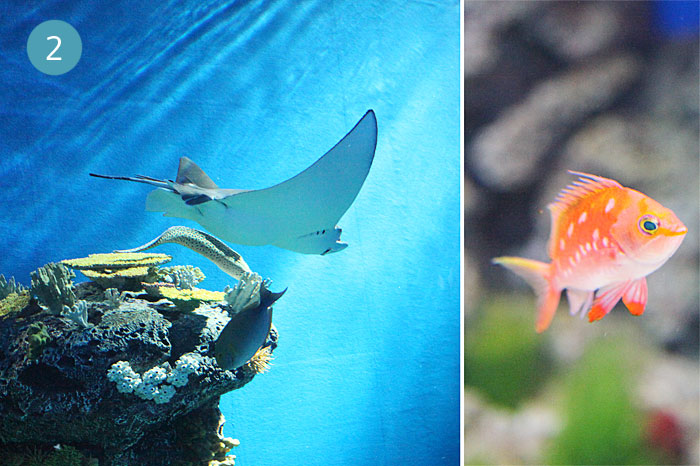 2 - Den Blå Planet - The Blue Planet - my cousin took us to see this newly opened aquarium. The architecture of the new building is stunning and the layout is really fresh and new. We saw this sting-ray and that little orange fish and a ton of other fish as well. We also saw some cute seals! 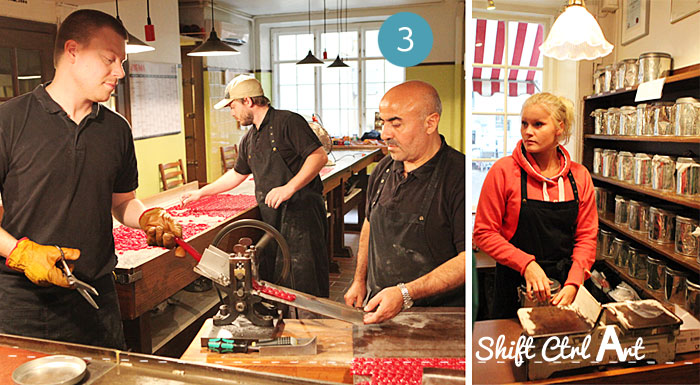 3 - Sømods Bolcher - Sømod's Hard Candy - This place we visited not once, not twice, but three times. In the front you can buy all this lovely candy and in the back you can see them making it just like the old times. This store has been around since 1891 and they still use the same traditions for making candy and you can really taste it. 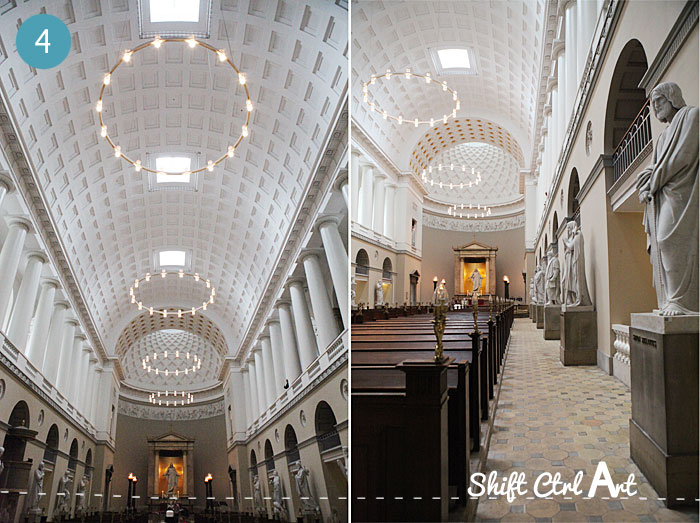 4 - Vor Frue Kirke - Church of Our Lady - such a pretty place. Just down the street from Sømods Bolsher 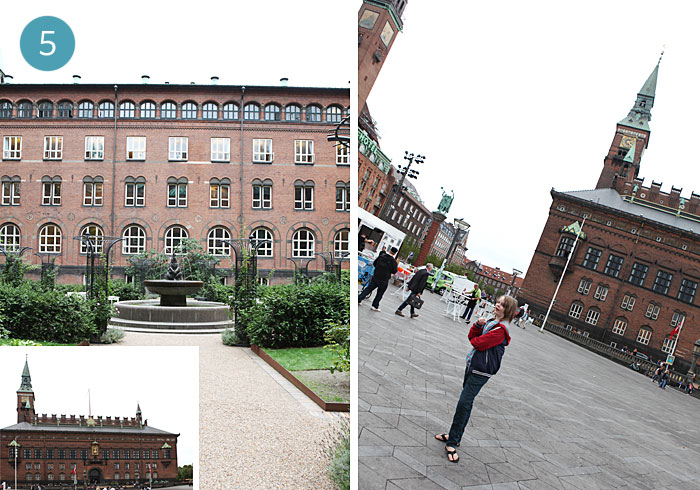 5 - Rådhuspladsen and court yard - City Hall Square - We walked by here a couple of times and we went around the side and into the courtyard and looked at the fountain on the left.

6 - Glyptoteket - no translation. This museum had a lot of sculptures. We later learned that there are some mummies in the basement that you can also see, so we just might have to go back here next time.

7 - Strøget - This is the main shopping street in Copenhagen. It's buzzing with people and life. Lots of stores, cafes, street artists and restaurants. We walked up and down, up and down several times. It's also a car free zone, which is awesome. 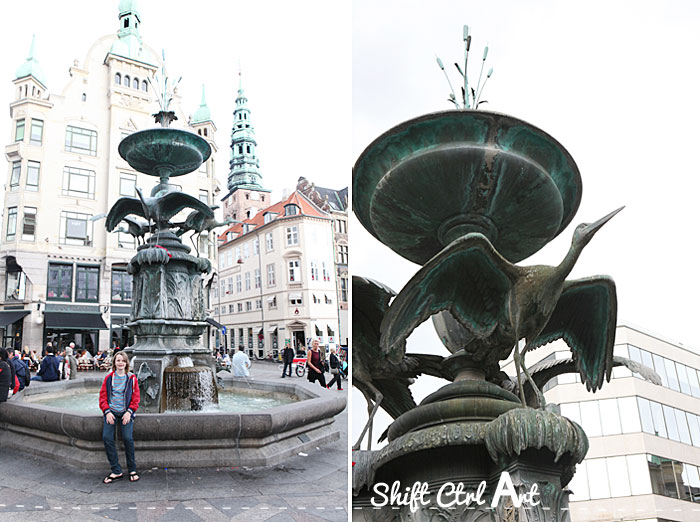 Storkespringvandet. - Stork Fountain - This is in the middle of Strøget. Probably the most famous fountain in Denmark. Named for the bird skulpture in the middle.

We also had to make a quick stop at H&M home good department. So many pillows, so little time.

Here we walked by a pop up gallery. I love this wall of book art and check out the folded lampshade. I want to make one right now 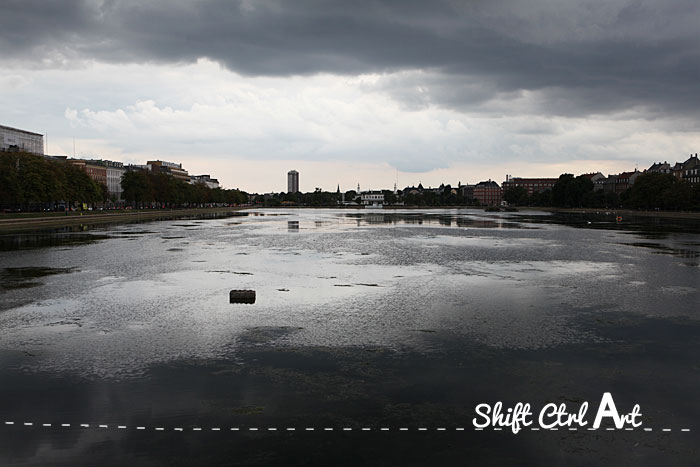 Oh and just so you don't think we didn't get any rain. These are "The Lakes" in the middle of Copenhagen. I took this picture just minutes before it started raining. It's a color photo, but it looks almost black and white doesn't it? 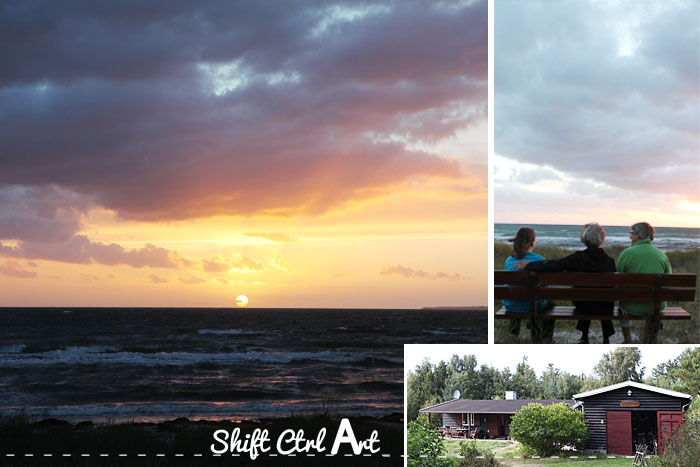 I am not going to tell you about every last person we visited - that would make this post far too long, but I do want to mention this visit. We went with my parents to some good old friends summerhouse where we stayed the night. I made one of the crafts here that I will show on the blog. We also caught this beautiful sunset. So I had to show you.

8 - Rørvig-Hundested færgen - The Ferry from Rørvig to Hundested. This ferry trip takes about 30 minutes and it stayed rain free except for the last couple of minutes so we all had our "Titanic" moment on the upper front deck. Awesome.

Tomorrow, I am coming back with the rest of the trip including the last eight field trips.

Next: Our trip to Denmark part II

Some blog posts contain affiliate links to products I use. More information
This article: Our trip to Denmark - part I of II first appeared on http://ahomefordesign.com.
Share 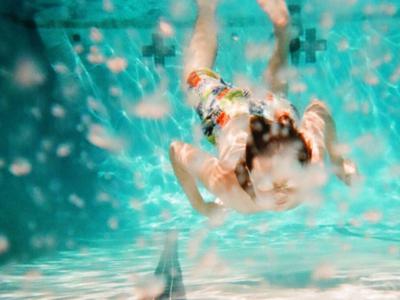 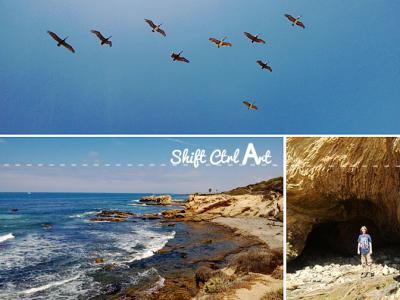 Homeschooling 5th grade part II - we had so much fun. 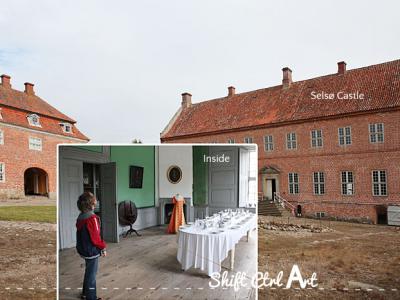 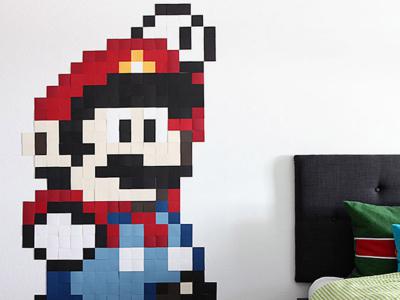 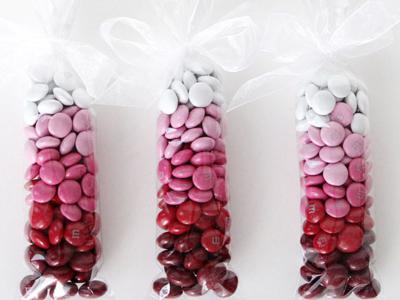 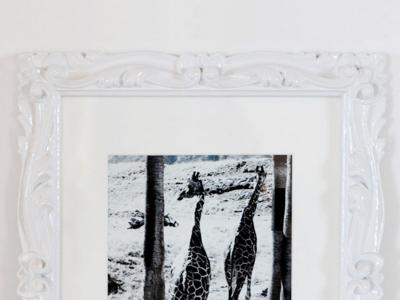 What, what, what, what? Macklemore thrift store challenge - Picture frame come-up.
Categories
Our trip to Denmark - part I of II is posted in the category Home Schooling | Travel & Photography