Make 3 crowd pleasing desserts from this vanilla egg base 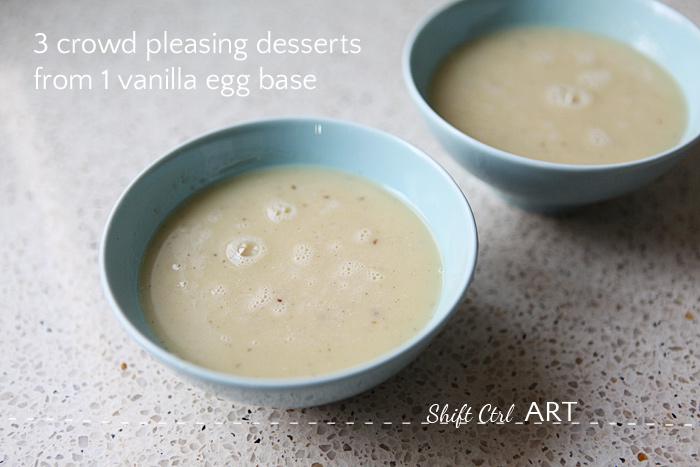 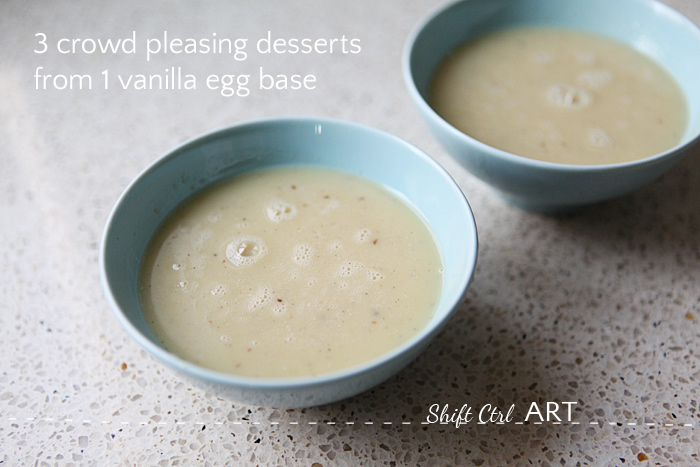 I was in the mood for a little bit of a dessert week. Well just today, tomorrow and Thursday. That's about a week, right?

Lately, my son B has been into making desserts. He has made French Macaroons,  Chocolate Eclairs, Crème Brûlée and dh and I have been willing participants in gaining a few pounds being taste testers.

Read all about them here: 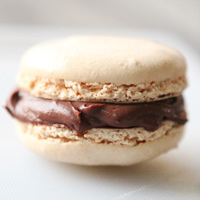 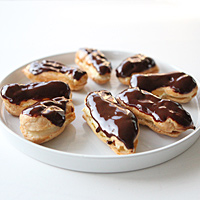 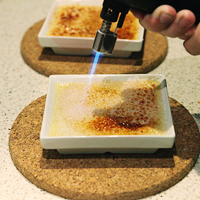 
The desserts he was making made me think of some of my own favorite desserts that all use eggs as well. Then, I came up with an egg base you can make yourself easily to use for all three desserts I will share with you over the next couple of days.

These desserts will be a lot simpler than the ones he made. And faster.

This vanilla egg base will be one of the ingredients in all three crowd pleasing desserts.

Today I will share the egg base recipe and the first dessert: 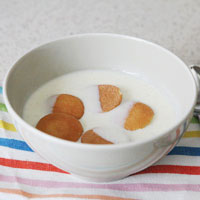 First, though, let's look at how to make the egg base. You only need a few ingredients. 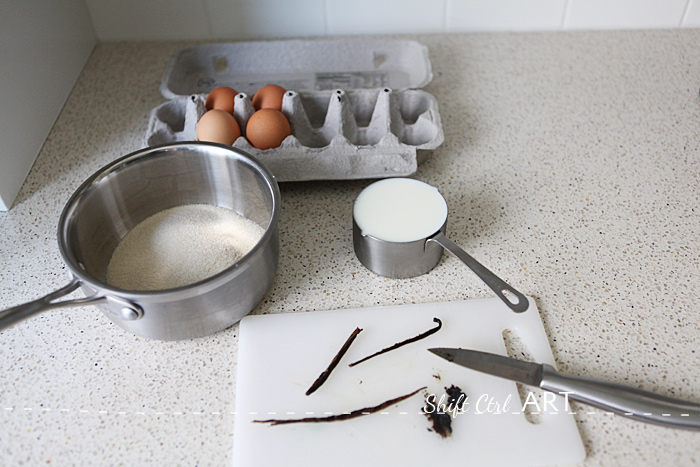 We buy our vanilla bean in bulk to keep cost down. 2 Vanilla beans at the supermarket here costs 15 dollars (Madagascar vanilla beans), but online, you can get 25 vanilla beans for about 19 dollars. we get the Bourbon vanilla beans as I find them more aromatic and rounded in flavor. They keep for a really long time in the fridge. I would say at least 6 months. 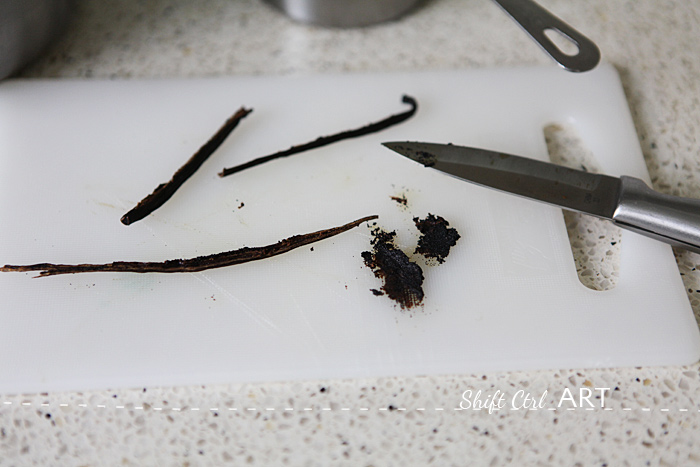 Cut your vanilla bean length wise and scrape out the seeds. You could use vanilla extract, but it doesn't taste as good (in my opinion

). If you do, add it at the end after the egg base is removed from the heat, otherwise it might just evaporate. 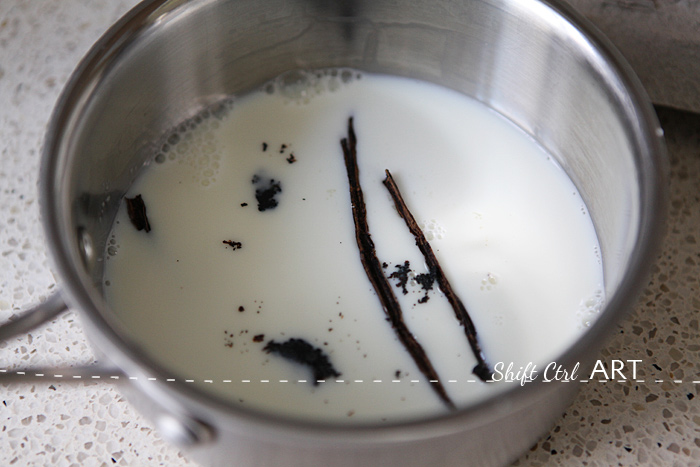 Place milk, sugar, vanilla seeds and the empty vanilla pods into a pot. Preferably a pot with a thick bottom. 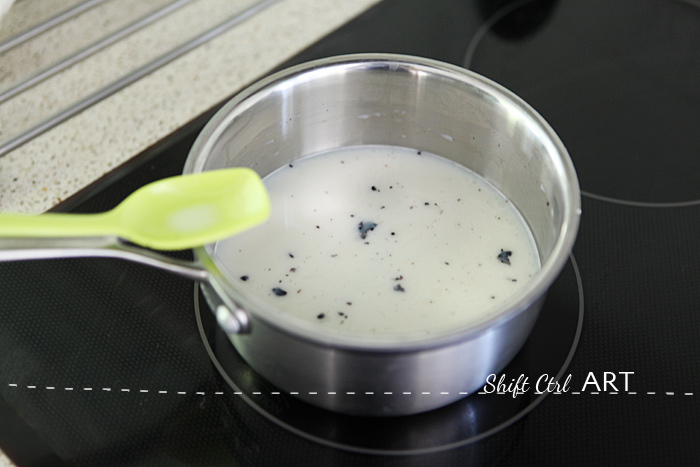 Heat over low to medium heat and don't forget to leave out any plastic utensils while doing this, so you don't get plastic chemicals leaching into the mixture. 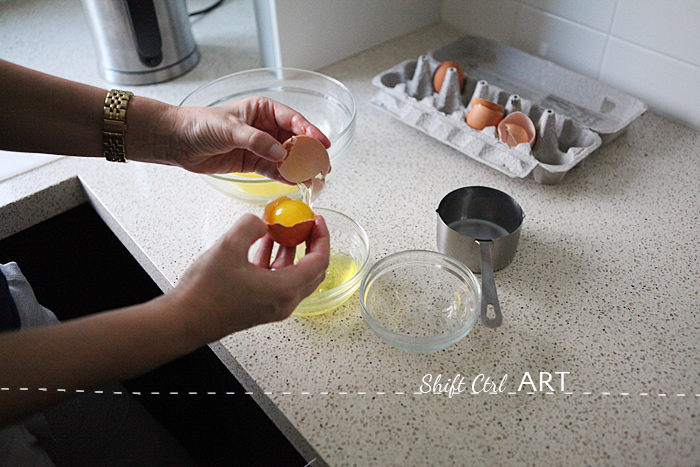 While the milk is heating, separate all four eggs into yolks and whites. 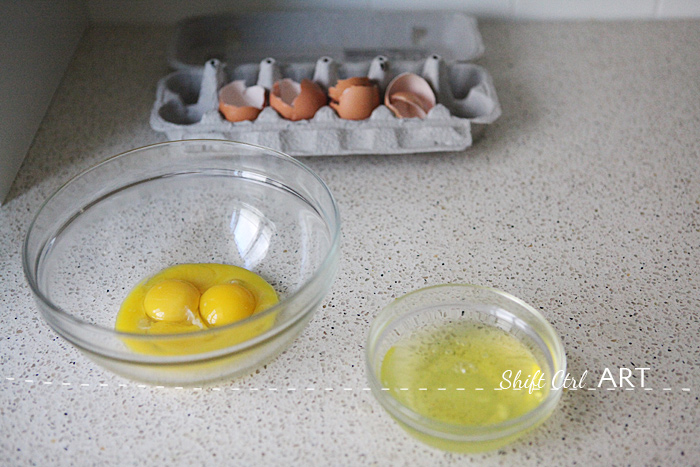 Don't discard the egg whites. They will be used for the dessert I am sharing on Thursday. Or you could make Pavlova's like B and I did here. 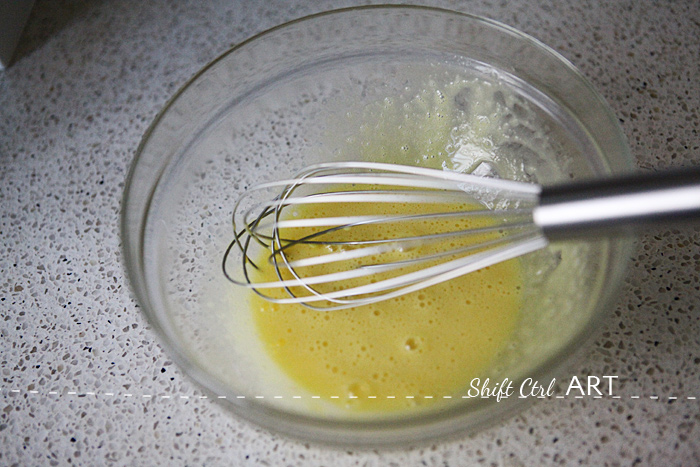 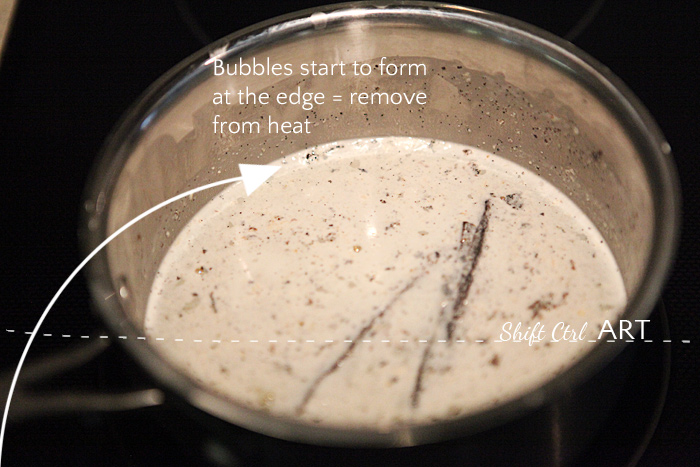 When the milk starts to really heat up it will form little bubbles around the edges. This is before it starts boiling. Now is the time to removed the milk from the heat. 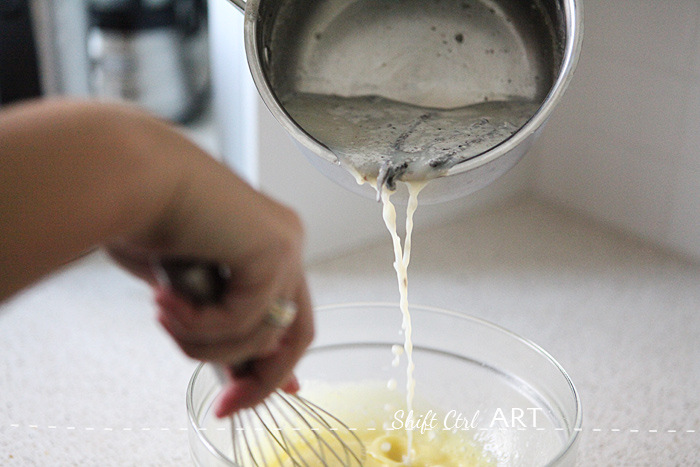 While whisking the yolks VIGOROUSLY, pour in the milk mixture, pods and all, in a very thin stream. This is to slowly temper the eggs without scrambling them. 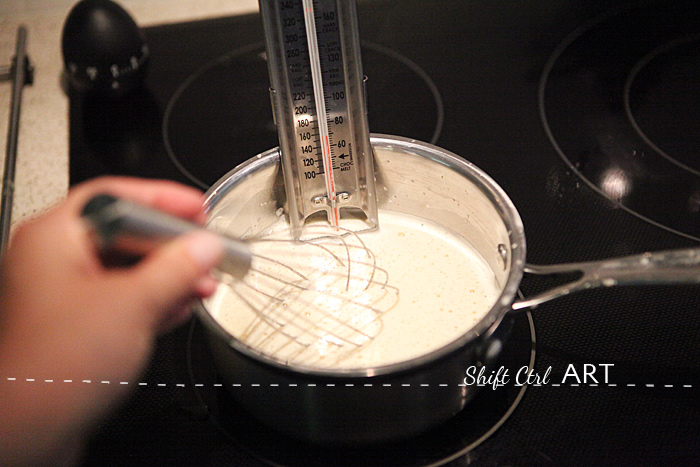 Pour everything back into your pot and insert a thermometer. 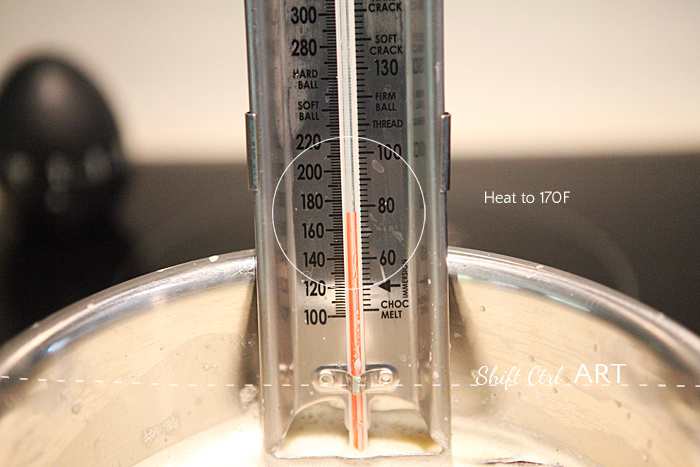 If you are worried about bacteria like salmonella, which is mainly why I am making this egg base, heat it up to 170F. Salmonella dies around 140-160F. I am a belt and suspender kind of person, so I have been heating it to 170. It only takes a couple of minutes at medium heat. Whisk the base the entire time.

If you have trustworthy eggs

such as getting eggs from your own organic, free range chickens (I am so jealous), you could skip this step if you don't mind eating your eggs raw, and just beat four fresh egg yolks with 3/4 cup of sugar and add the vanilla seeds for your egg base (don't use the empty pods in that case). Then skip straight ahead to making one of the desserts.

I don't have access to trustworthy eggs, so I make an egg base 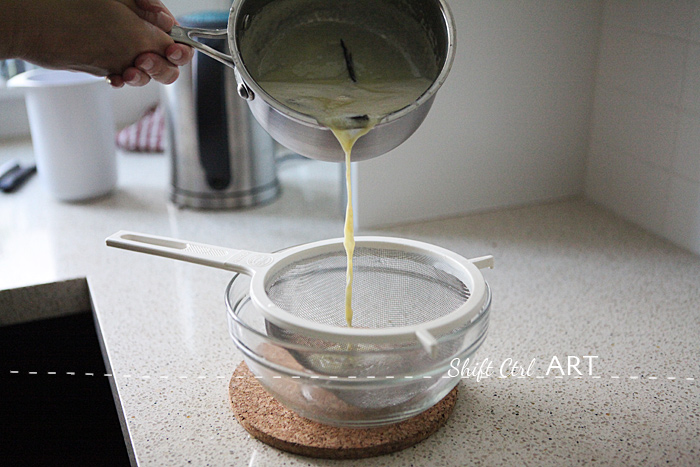 Once it reaches 170F, quickly remove the pot and strain your base into a CLEAN bowl (don't use the bowl from before unless you clean it first or it would defeat the whole purpose of heating everything up). 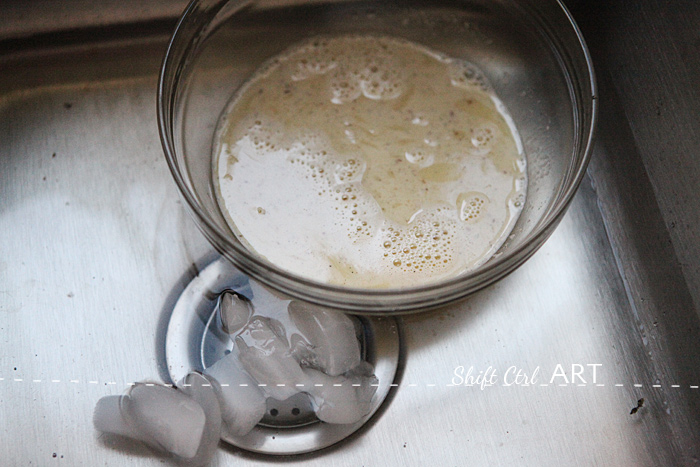 Next, arrest the heating process by placing the bowl into some cold water in your sink. You can even add some ice cubes if you want.

Last, divide your egg base into two equal portions, store in the fridge for up to 3 days (I'm guessing past that it won't be good anymore...). Making two egg bases at a time let's you make two desserts over two days, but each day will be a different dessert. Great to do on the weekends.

Now, all you have to do is decide which of the three crowd pleasing desserts you will want to make!

Let's take a look at the first dessert - a staple in the summer time in Denmark: Buttermilk "cold bowl" dessert - (kærnemælkskoldskål) Here are the other desserts from this series: 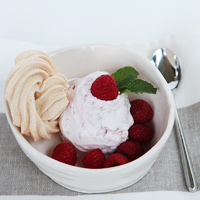 And here are the other three desserts that B made during our June Cooking days that I posted over on B's Corner. Some blog posts contain affiliate links to products I use. More information
This article: Make 3 crowd pleasing desserts from this vanilla egg base first appeared on http://ahomefordesign.com.
Share 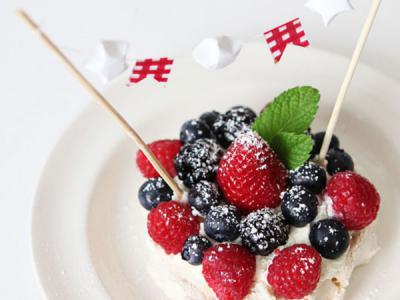 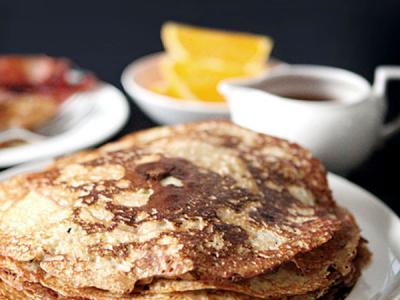 Danish pancakes - aka crêpes.
Categories
Make 3 crowd pleasing desserts from this vanilla egg base is posted in the category Desserts